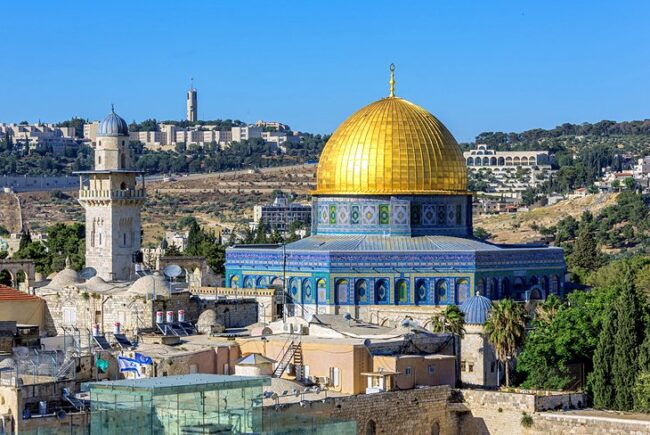 Whether it is just tourism or pilgrimage, the choice is huge if you want to visit destinations that are important to Jews. For thousands of years, history has scattered them all over the globe and has left an indelible mark on every site.

The Old and New Testaments represent Jews who make pilgrimages to Jerusalem three times a year. Several prophets also undertake their personal pilgrimage to the Mount Sinai where they meet the Lord. Even today, some places for Jews are very important – for example, it is known worldwide about the prayer at the Wailing Wall of the west side of the Jerusalem Temple, which was definitely destroyed in 70 AD.

We will present you some of the most important and popular Jewish tourist destinations.

Without any dilemma, this is the first destination on our list. As many Jews live outside their home country, as soon as they are given the opportunity, they must first come there.

Israel is a land of spiritual tradition, of natural beauty, of a peculiar culture in which, according to legends, many miracles have taken place.

Israel is a country located on the east coast of the Mediterranean Sea in the Middle East. The countries bordering Israel are: Jordan, Syria, Egypt, Lebanon. Interestingly, two-thirds of the surface of Israel is actually the Negev Desert. And the dead sea is the lowest point on earth because it is located at 408 meters below sea level.

All Jews consider Israel to be their spiritual home and call it the Holy Land or the Promised Land. Israel has a special place in the lives of Jews when it comes to their faith. Bearing in mind above all the Second Jewish Temple, that is, its remains.

When referring to the Second Jewish Temple, one is referring to the temple located in Jerusalem, which was the main place where Jewish sacrificial rites were performed and the main seat of the Jewish faith. The Second Jewish Temple was built on the site of the First Temple, also called Solomon’s Temple. This temple was destroyed in the Babylonian conquest of the city of Jerusalem.

The Old Town is surrounded by walls dating back more than a thousand years, and once entered, the path leads to the Wailing Wall.

The Wailing Wall is the most visited place in Israel, where Jews from all over the world come to pray and leave a message written on paper in the cracks of the wall.

The Tower of David, Yad Vashem and many other locales are a must visit in Jerusalem, and all of Israel offers many destinations.
Visitors to the Old City of Jerusalem can also climb the upper plateau where the once great Jewish Temple used to be, and today there are two large mosques. In well-defined periods, most often in the afternoon, it is possible to visit this plateau, to which some of the most famous events in history are related. This site can be visited every day except Fridays (when Islamic holy day) and Saturday (when Jewish holy day).

If you come from another part of the world and don’t have the habit of going to the Synagogue often, consider buying a Tallit gadol. You will need them when you attend the prayers, and there will be many in your travels throughout Israel. This webiste is a great place to see which models can be purchased, for what occasions they are used and what are the prices.

In 1516, several hundred Jews were ordered to be expelled in Venice to a special part of the city that was under surveillance. This is the etymology of the word ghetto, which in the Venetian sign means “to melt”, and part of the city was close to a steel smelter.

They were only allowed to leave the ghetto during the day, and in the evening they had to return. Over the centuries, many Jews have immigrated from other countries such as Spain, Portugal and Germany, so the population of the ghetto has grown to several thousand.

Cannaregio is a mesmerizing neighborhood, and they recently erected a memorial here to victims killed by a community of Venetian Jews.

Once upon a time, Portugal was one of the places where a large number of Jews lived. Traces of Jewish culture but also Muslim and European can be seen all over Portugal and Spain, which gives us incredible architectural endeavors and art in general. Most things to see is in the capital, Lisbon. The synagogue should be the first place to go, and then visit all the famous squares, the Belem neighborhood, listen to the famous Portugal music of Fado, visit museums and many other sights. The beaches are also only thirty kilometers away.

There is a Jewish Quarter where you can see various sights, most notably the Holocaust. There are museums, synagogues and memorial centers.

Anne Frank House is another must-see destination when you arrive in Amsterdam. The eerie breath of war can still be felt here. The rooms are half empty, the bare walls, the missing furniture, the mysterious muted depressing silence, the claustophobic space where people hid during the war.

The former shelter where a Jewish girl, Anna Frank, wrote pages of her diary has been turned into a museum today. For almost 2 years she and her family were hiding in a house in Amsterdam.

The shelter was housed in the office building of the company Anne’s father worked for. Unfortunately, at the end of the war, they were discovered and Anna and her family members were sent to concentration camps. Only Anne’s father survived the war.

Today, a museum has been made of the rooms where Anna Frank tried to survive the terror of World War II. In the museum you can find excerpts from the world-renowned Diary of Anne Frank as well as historical documents, photographs and various items that belonged to those who were hiding in the building. The original diary is also in this museum.

When we say Prague, we mean the Josefov town quarter. Since the 13th century, Jews have been living there, forbidden to live anywhere else in the city, much like Venice. There are many synagogues as well as one of the oldest and best preserved cemeteries. Also the oldest Synagogue in Central Europe is located here. The second synagogue was turned into a memorial center dedicated to those killed in World War II in the Czech Republic and their names are inscribed on the walls. You will also find many organized guided tours there that can guide you in detail into Josefov’s history.

These are some of the most important places to visit, and certainly worth a visit to New York, which has a huge Jewish community, then Germany, as well as many other places in Israel that can be part of your pilgrimage.