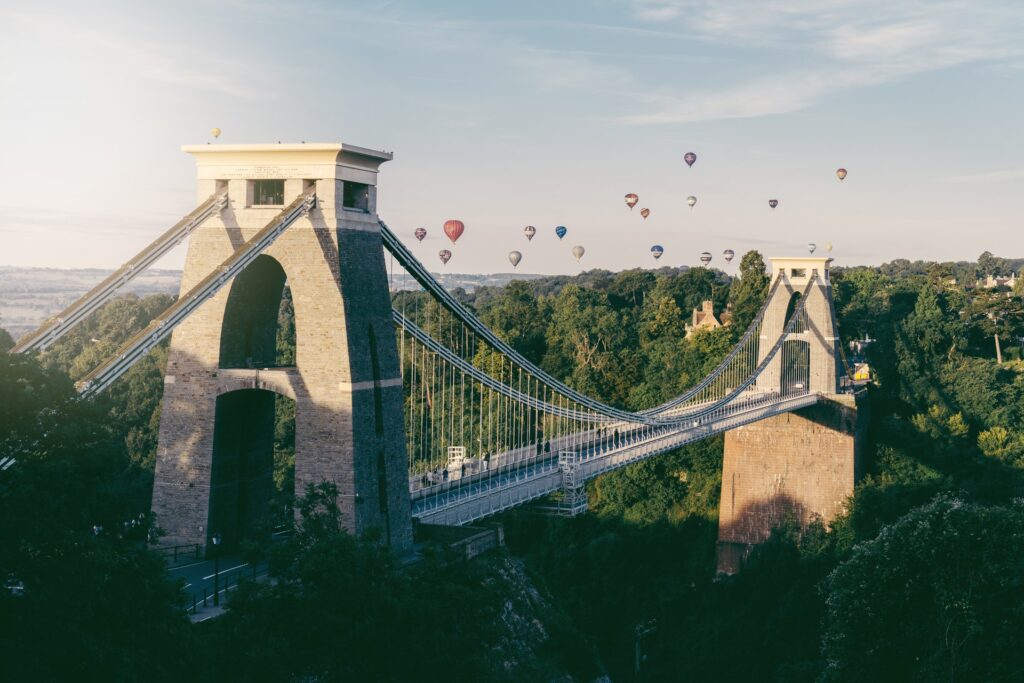 Set inland just off the Avon River and with access to the Bristol Channel, the city of Bristol has plenty of genuine reasons for being one of the most beautiful cities in England. With a quite illustrious history, in having one of the oldest ports in England, the city is full of heritage and has quite astonishing city center, filled with 18th-century architecture, plenty of museums, art galleries and history, it’s no wonder Bristol has become an absolute tourist hotspot over the last decade.

Following the departure of John Cabot’s voyage to North America in 1479, Cabot Tower in Brandon Hill Park was erected on the 400th anniversary of the voyage and remains one of the most celebrated adventures from Bristol’s illustrious port. Bristol’s famous port was also a trading center and a Royalist headquarters during the English Civil War. Building ships have been part of the foundations that have kept the city going for centuries. Famous for creating I.L Brunel’s SS Great Britain, the ship is famous for not just being the first steamship, but also the first to make systematic crossings from Bristol across the Atlantic. Brunel, arguably the most famous Bristolian also designed the famous Suspension bridge which spans across the Avon Gorge.

There’s more to Bristol than just the history of Brunel though. With 30 art and museum galleries, it remains a city of fantastic culture and a learning curve for anyone interested in engineering and England’s exploration history. There’s also the famous Bristol Zoo Gardens, which arguably competes with some of the famous London Central zoos. Find out more about Bristol here.

Originally known as the church of Saint Augustine Abbey. It’s had a lot of redevelopment over the years and Bristol Cathedral has taken around 600 years to achieve its current state. The East end of the chapel was actually rebuilt in the style that it has now and was done so by Abbot Knowle, which dates at around 1928 and 1330. The transepts along with the central tower were eventually finished in the 16th century.

Steeped with history, the cathedral is undoubtedly one of the most popular destinations in the whole of Bristol, and the whole of England. As part of its famous features is a rectangular chapter house which has been decorated in a Norman zigzag style. It’s a tourist destination that is perfect for families and is a popular year on year.

On the Avon River, the old port of Bristol represents so much of what Bristol is about. Over recent years, the port has been given a new identity and a new lease of life. Lots of the warehouses have been restored and transformed for new contemporary uses. Previously known as the ‘floating harbor’ it’s now packed out with museums, exhibitions, and galleries. There’s also of course the Bristol Aquarium, the Arnolfini visual arts and music center. Only outside the M shed, you can see locomotives, as well as Faribarin Steam Crane, which also happens to be the old surviving steam crane of its type in England.

If you fancy something a little different from the museums and learning about the history of the city. You can do something slightly different and hop onto a boat journey. There are history trips around the Avon River, but also speed boat rides that will take you around pretty much everywhere.

Sticking around the docks, Brunel’s SS Great Britain as it’s also known as the world’s first iron-hulled passenger ship. It lives on the same dock from which it first launched all the way back in 1843. It was also the first-ever ship that used screw propellers on a ship. The ship is a testament to Brunel’s engineering ingenuity, and you can stroll around the ship’s upper and lower decks, even checking out the first-class passenger’s lounge.

The site is also home to the Brunel Institute and the David MacGregor Library, which has an archive of thousands of books, document plans, and old treasures that relate back to England’s greatest engineer. If shipping history is your thing, then this is undoubtedly the place to go.

The bridge stands 702 feet between its two piers and remains one of the most beautiful eyes soars in the country. It overlooks Avon Gorge an enormous 260-foot dropdown. The bridge was created in 1864, a massive 33 years after he had first submitted his plans for the bridge. You can learn all about the history of the bridge at the information center, where you can find out about the bridge’s construction. But there is more to it. If you go on the weekend, you can get a behind-the-scenes tour. If you’re really lucky you might see get to see the peregrine falcons flying about the Clifton side of the bridge.

Around 18 miles from Bristol, Cheddar Gorge is the natural highlights of this city. A National Nature reserve, the views include astonishing 450-foot cliffs and stunning stalactite caverns. If you’re feeling adventurous you can also go for a bit of cave diving and check out Gough’s Cave which has hidden chambers around in it. You need a somewhat degree of fitness to tackle parts of the gorge though, as there are around 274 steps to get up and down the side of the Gorge.

An 18th-century mansion and estate. Blaise Castle House provides a feel for the luxury lifestyle of a prosperous family country estate. It’s got pretty much everything you’d expect from such an astonishing house. There are ruins of Kings Weston Roman Villa, which has been somewhat updated and includes baths, a heating system, and a mosaic floor. The house and the roman baths do get closed, however, from January through to March.

As well as all of the normal tourists’ attractions in Bristol that catches your eye, there are lots you can do in the city over the course of a weekend visit. The city center is packed full of award-winning restaurants and pubs and if you’re looking for an opportunity to have a solid night out, there are plenty of clubs for you to get stuck into as well.

There are some beautiful places you can stay as well if you’re planning on being there over the course of a weekend. Bristol has without a doubt become one of the tourist locations of the country.