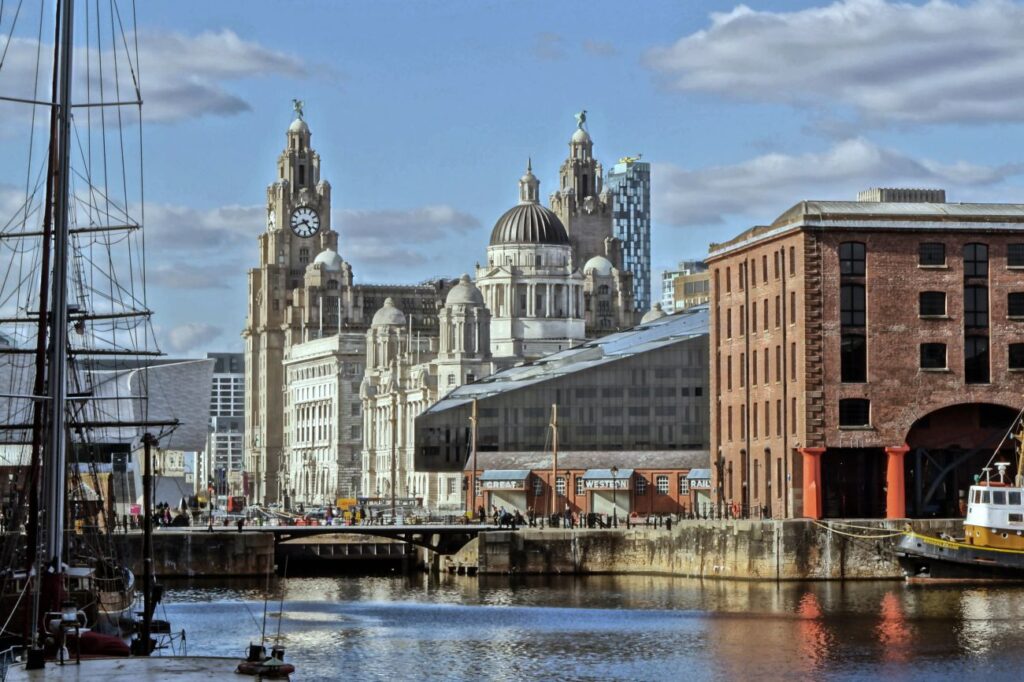 Liverpool is a city like no other. From the salt-filled air of the iconic docklands to the jaw-dropping architecture, the city is a haven for tourists and residents alike. Nestled in the North West of England, Liverpool sits on the doorstep of the River Mersey and has been the UK’s trade capital for hundreds of years.

With an eclectic mix of historical architecture, the city wears its inspirations on its sleeve. Beautiful, cobbled streets are lined with gorgeous Georgian townhouses, making the history almost tangible. There’s a powerful sense of companionship when you enter Liverpool, with scousers being some of the friendliest people on the planet.

There is so much room for discovery and excitement when it comes to Liverpool. It offers unparalleled nightlife, tasty food spots, world-class museums, and iconic football (soccer) teams. Whether you are a history buff, a sports fan, or a nature lover, there is something for everyone in this beautiful city.

If you are looking to experience all that the city has to offer, here is a quick guide for the absolute must-see places on your travels. Enjoy!

Where else could we start on this list than the beloved Liver building? Constructed over 100 years ago in the early 1900s, the Liver Building sits proudly on the River Mersey and is revered as a world heritage site.

Liverpool has one of the most iconic waterfronts in the world, and this member of the Three Graces explains why. With two green-tinted Liver Bird monuments perched on the top of the building, and a clock face larger than Big Ben’s. The Royal Liver Building is perhaps the most familiar site in Liverpool’s breath-taking skyline.

The birds themselves are responsible for one of the most famous folktales in the city. Called Bella and Bertie, the birds watch over the ships on the River Mersey and the people of the city, respectively. It’s said that if the birds ever flew from their perch, it would spell doom for Liverpool.

While this is unlikely to happen, make sure you tick this beautiful building off your bucket list before the birds take flight.

If you are looking for tasty food and beautiful architecture, there is no better place in Liverpool than Chinatown.

Liverpool has a wonderfully diverse and multi-cultural community epitomised by Chinatown. The area was the first established Chinatown in the entirety of Europe, dating back to the 1850s. Since then, the town has attracted over 10,000 Chinese residents to the city.

Perhaps the biggest attraction to Chinatown is the monumental Chinese Arch. The Imperial Arch was gifted to Liverpool after the city was twinned with Shanghai and was assembled in 2000. It is the epicentre of Chinese New Year celebrations in the city, which is a breath-taking spectacle in itself.

Standing at 44 feet tall and spanning Nelson Street, the archway is a stunning piece of architecture. It is adorned with 200 dragons and protected by two huge bronze lions. The Arch is so big, in fact, that it is the largest outside of China. That’s right, the largest you will find in any country other than the motherland. Impressive, right?

With the World Museum, Museum of Liverpool, the International Slavery Museum, Walker Art Gallery, Maritime Museum, Sudley House, and the Lady Lever Art Gallery, you will be spoilt for choice.

The museums are home to some of the most historically significant specimens in the world. From a lifejacket rescued from the Titanic to Egyptian artefacts, the city is a dream for history buffs. The collection spans over 80,000 artefacts and recently held an exhibition containing THE Terracotta Army.

History isn’t the only thing impressive about Liverpool – the present is equally as exciting. The city has been transformed in recent decades thanks to massive regeneration projects.

The first major project that set the wheels in motion was Liverpool ONE – a great shopping centre to rival anywhere in the country. Liverpool has plenty of shopping locations to choose from, with examples including Bold Street, Liverpool Shopping Park, and the MetQuarter.

But the pick of the bunch is undoubtedly Liverpool ONE. Costing an eye-watering £960 million, the site features a huge cinema, a handful of top restaurants, and more shops that you can visit in a lifetime. If you want to relax, the outdoor shopping centre can provide that too with the beautiful Chavasse Park accessible from the top floor.

If you want to learn more about regeneration projects, and property opportunities changing the face of the city, check out RWinvest.

Dating back to 1884, Anfield is the current home of the Premier League Champions, Liverpool FC.

Attracting over 53,000 fans every week, the stadium is internationally renowned for its classic architecture and electric atmosphere.

With tours available to explore the stadium, you can visit the club’s illustrious past, iconic Boot Room, and overflowing trophy cabinet. The Club is the most successful in English football history, making it globally known.

A short walk away from Anfield is the equally iconic, Goodison Park, a stadium home to Everton FC – one of the oldest football clubs in the world.

The area is the epicentre of footballing greatness and is worth a visit from fans of the beautiful game.

While the locations on this list are incredible, there are simply so many places to visit in Liverpool that it would be impossible to fit all of them onto one list.

Sites like the historic Albert Dock and the renowned Cavern Club attract thousands of visitors every year. You could spend hours exploring every inch of this magnificent city.

Something exciting is located around every corner in Liverpool, so be prepared to explore, get lost, and fall in love with this beautiful location.