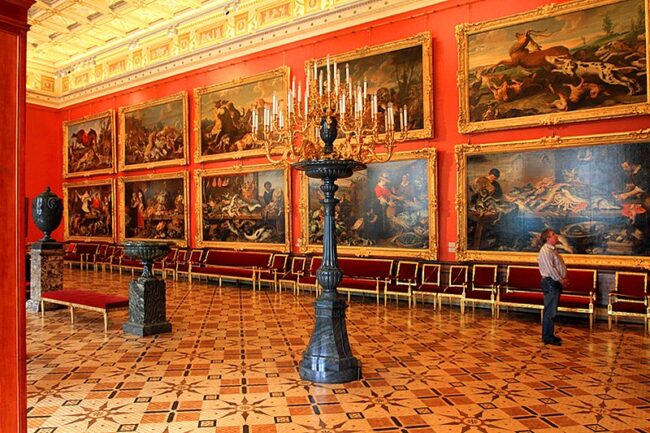 St. Petersburg is the second largest city in Russia and is located at the mouth of the Neva River in the Baltic Sea. It was founded by the Russian emperor Peter the Great in 1703 and was the capital of the Russian Empire from the 18th to the 20th century. In 1924, after Lenin’s death, the city was named Leningrad in his honor.

With an extremely rich cultural heritage, spectacular architecture, complicated history and geographical location near the west and the polar region, St. Petersburg is a place to talk about for days.

One of the symbols of St. Petersburg is the Hermitage Museum. This remarkable museum holds about three million objects, from the Stone Age to modern times, and is one of the most respected galleries in the world. It was founded by the Russian Empress Catherine the Great, and today the museum is housed in 10 buildings, the largest of which is the Winter Castle. Apart from numerous works of art, the most significant is the collection of artists Michelangelo, Leonardo da Vinci, Rubens, Rembrandt, Picasso, Matisse and Van Gogh. It is visited by over 3 million tourists annually, and the museum is also a UNESCO World Heritage Site.

It was founded in 1764, when the famous Empress Catherine the Great (Catherine the Second Alekseevna), who had otherwise been remembered in history as the patron saint of art and literature, purchased 255 valuable paintings from a Berlin merchant for her personal collection. Among other things, there were 13 of Rembrandt’s and 11 of Rubens’s works. She then instructed her ambassadors around the world to collect the most valuable artifacts and works of art. Her collection has grown over time, and it opened to the public in 1852.

The Jordan Staircase was named in the 19th century because it used to bring the royal family down to the River Neva, during the annual celebration of Christ’s baptism in the Jordan River. This white marble staircase, made in the original dynamic Baroque style, introduces visitors to the splendor and extravagance of the Russian imperial family, which is breathtaking. It is the first contact of most tourists with the interior.

Since it takes around 10 years to visit the entire museum in detail, we will present some of the most significant works of art, although it is very difficult to single out.

This artwork is smaller in size and is one of two paintings by Leonardo da Vinci to be kept in Russia. It used to have a different name, but its name was changed after it was purchased. It was named after its previous owner, an architect who was involved in the design of the Hermitage. The second work of the ingenious Renaissance painter is called “Madonna Litta” and is also kept in the Hermitage. This painting is sometimes sent to guest exhibitions, while “Benois Madonna” is in rather poor condition, which is why it is protected by armor glass and is never taken out of the museum.

This is the only Michelangelo’s smaller sculpture to be preserved in Russia. It is thought to be preparatory work for the Medici Chapel at the Basilica of San Lorenzo in Florence. It was procured by Empress Catherine II, who founded the Hermitage. Since then, the sculpture has not left the museum.

The Rembrandt masterpiece stored in the Hermitage became known, unfortunately, after the vandal act in 1985, when a mentally disturbed man poured it with sulfuric acid. Thereafter, the painting in which the artist portrayed both of his beloved women in Danaya’s image was on restoration for 12 years.

This is probably a rare case where a copy of a great work of art is as valuable as the original. Rafael and his disciples dated 1517-1519. painted the famous part in the Vatican. Two and a half centuries later Empress Catherine II saw them and immediately ordered that their true size copy be made at the Hermitage, which was still under construction at the time. Unlike the Vatican loggias, the Russians were immediately built as a closed gallery, and are therefore still well preserved today. In addition, that part of the Vatican is always closed to visitors.

Other great works of art

As we have already said, whatever is inside a winter castle is of great importance to humanity. You can see the works of Botticelli, Caravaggio, Claude Lorrain, Ignace Henri Jean Fantin Latour and countless masters. If you don’t have the opportunity to see them live right now and want to see how they look or make your home more beautiful, click here

Other landmarks of the city

The Peter and Paul Fortress is surrounded by the River Neva and today is one of the most recognizable symbols of St. Petersburg. It is under UNESCO protection.

Built in the early 18th century, the Peter and Paul Fortress never played the protective and defensive role it was built for.

The park and castles of the Peterhof complex are located 20 kilometers from the city center.

The Peterhof was proclaimed a museum in 1918, and until then it was in the function of a summer imperial residence.

The main castle was destroyed during World War II and its restoration is still underway today.

Peterhof is known as the Russian Versailles as well as the Russian capital of magnificent fountains. The largest fountain in the world is here – the Great Cascade. The most beautiful is the Samson fountain and the lion.

Fountains are open from May to October.

Church of the Savior on Spilled Blood

The most significant Russian Orthodox church. Built at the site where Russian Tsar Alexander II was killed in the late 19th century.

The temple is visually reminiscent of St. Basil’s Cathedral in Moscow.

The restoration of the temple has been done for over 30 years. During the rule of the Bolsheviks, the temple was looted.

During World War II, the temple served as a food depot, and after the siege of St. Petersburg served as a warehouse for vegetables.

Today is a museum.

This is one of the cities you must visit. Start from Hermitage first, and it’s best to buy tickets online. When you see at least part of the winter castle, head to Nevsky Prospect and as you stroll along that famous boulevard, you’ll see some of the city’s most famous landmarks. It is also close to the Navy headquarters. Cross the River Neva to the Peter and Paul Fortress and then take a cruise. Remember that the climate is very variable, so you have to take care of the wardrobe. All we have to do is tell you – enjoy!