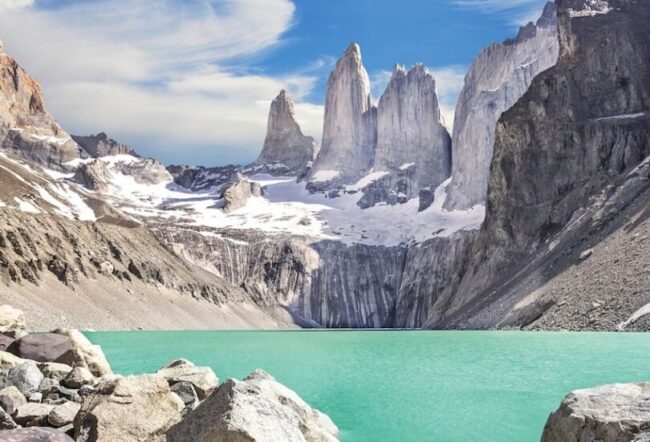 Visiting Chile is nothing short of spectacular. Chile has some of the strangest climates in the world. For example, the south is home to penguins while the north has the driest desert in the world.

This strange phenomenon has put Chile on the radar ass one of the best places to visit. While it can be hot and cold at the same time, we’ve put together the places that you absolutely must visit while traveling to Chile.

Located in the northern parts of the country, La Serena has the title of being the second oldest city in Chile. But not only that, the most spectacular thing about La Serena is its stunning architecture.

The city is notoriously known as an intellectual town. Here, there are a lot of things to do such as swim, snorkel, and anything else that involves the sea.

You can also take a bike ride to Fray Jorge National Park, passing through Elqui Valley and Isla Damas.

Santiago is the capital of Chile but most importantly, it is the main cultural, historic, and social heart of the country. Here, you can do anything that comes to your mind.

But there are some exclusive activities such as skiing, wine sampling some of Chile’s finest wines, visiting lots of museums such as Museo Chile de Arte Precolumbio.

Also, many famous people have lived in the capital, with their homes being available as tourist attractions. The one you definitely want to visit is the home of artist Pablo Neruda.

If you’re interested in visiting anything that resembles Monte Carlo, then Iquique is the city to be at.

This Georgian architecture city is where the fun is at. The most easily accessible activity here is to visit the various establishment that let you play games of chance.

Furthermore, Azetoreca Palace is one building that you definitely want to see for yourself. Lots of famous and rich people visit Iquique daily, so seeing fast cars, pretty girls, and rich guys aren’t anything new here.

Also, the city is accessible by the sea, and a great portion of fun happens there. From your ordinary beach fun to yacht parties, and even public pools that simulate waves, everything can be done here.

Chiloe Island is an exceptional place of magnificent architecture and a very unique culture. This is the second largest island in all of South America, and the largest island of Chile. The island is located in the north, as part of the Chilean Archipelago, and it is a thing of beauty.

Not only that, but Chiloe Island is home to some of the country’s finest and magnificent architectural designs. Travelers visiting the island are left breathless when they first see the beauty of Chiloe. Furthermore, the island is quite religious since the first colonizers were Spanish Jesuit preachers.

If you happen to be looking for accommodations in Chile that are quite reasonably priced, hospitable and offer exceptional service, then we suggest you create an account with Bookmundi.

Have you ever seen a fjord? If not, then Chile has an abundance of fjords all waiting for you to come to visit them.

A very popular thing to do in Chile is to go on a cruise to see the magnificent fjords. Not only that but you’ll be going on a unique journey that takes you from Puerto Montt all the way to Puerto Natales.

The Chilean fjords are located in the southern parts of the country, the part of the country that is mostly uninhabited. Here you have the chance of experiencing a life-changing event that can be described as one of the most magnificent sundowns.

Valparaiso is yet another city to visit while in Chile. It is located a few dozen kilometers west of Santiago and the town can be best described as a financial port.

When you first visit Valparaiso you will instantly notice how colorful the town is. Valparaiso is the birthplace of that famous artist we mentioned earlier, Pablo Neruda.

Valparaiso is anything but a boring place. From awesome rooftops to paradise beaches and lush nightlife, Valparaiso should be visited if you have the time.

The Chilean Lake District can be easily described as a group of lakes that span across 400 kilometers. The first lake, if you look at it from the south upwards, is Lago Llanquihue and it is the biggest one.

Going north you have the smaller one such as Todos Los Santos, Lago Rapanco, and Lago Puyehue. All four of these are quite close to each other and they cover a large area together. They are part of Puyehue National Park and a thing of beauty.

However, that’s not all of the lakes. Moving further north you have Lago Ranco, Lago Maihue, Lago Rinihue, Lago Panguipulli, and dozens of other smaller ones that all fall beneath the Shoshuenco Vulcan. As a matter of fact, there are dozens of Vulcans around the Lake District, and each one is magnificent in its own rights.

While we mentioned only a few of the lakes that make the entirety of the district, there are dozens more that we didn’t. Truthfully speaking, the Chilean Lake District is so special that it takes a vacation on its self.

This town is anything but unknown to natives and tourists alike. While this looks like an ordinary small town, it’s actually a place that offers the best views in the whole country.

Not only you have historic buildings to observe, but you can also see and even take a picture of the cute alpacas. Also, San Pedro de Atacama is a popular destination for stargazers and those that love looking at the night sky. The town offers visitors the clearest sky in the entire country, and it is one of the darkest places in the world. While there is civilization here, the lack of artificial lights helps bring out each star in the sky.